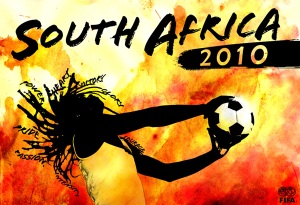 One day I was sitting with my students at Ekenywa Secondary School just outside Arusha, Tanzania, where I was then teaching English. We were watching a soccer game, when I turned to John, my star pupil, and asked a question that had been on my mind.

John, who was a devout Christian, smiled.

“Yes, of course!” He said. “Maradona, when he made the goal in the World Cup, like this.” He made a fist and punched the air. “Wonderful!!”

I’d suspected as much.  Everyone seemed to know the famous Hand of God goal: the Argentine’s famously illegal point against England in the 1986 World Cup.  Soccer, it seemed, was a language we could all speak and the soccer field was a place where we could all meet. 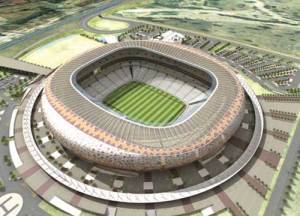 This was some years ago, and in the meantime the sport has only woven itself more tightly into life across the continent, as African teams get closer to the top, and African players occupy more spots in the world’s great clubs.  Now, with the World Cup finally taking place in South Africa, I wanted to put together a list of books about Africa and Soccer.   New titles are flying onto the shelves in anticipation of World Cup 2010, which begins very soon!  If you need to bone up, here are some titles:

Feet of the Chameleon: The Story of Football in Africa, by Ian Hawkey

This book is about the history of the sport on the continent and covers everything from the 1994 plane crash that killed the entire Zambian national team, to soccer and the Algerian liberation struggle. ESPN soccernet called it, “fascinating, funny [and] beautifully written.”

A great read that gives you a good view of how football is lived and played in 13 of Africa’s 53 countries, and a good primer for anyone headed to South Africa, either virtually or in real life.  My interview with Bloomfield will be on WorldHum.com soon.

Belly of the Atlantic, by Fatou Diome

This novel by Senegalese Diome chronicles the lives of several young people who dream of a better future across the ocean in France, where one of them is scouted by a major soccer club, but where his dream is not at all guaranteed of coming true.

More Than Just a Game: Soccer vs. Apartheid: The Most Important Soccer Story Ever Told, by Chuck Korr and Marvin Close

Moving south, this is the story of the Makana Football Association, which was formed behind the walls of Robben Island, where Nelson Mandela was famously imprisoned. A great story of soccer providing a glimmer of hope where there is little to be had.

African Soccerscapes: How a Continent Changed the World’s Game, by Peter Alegi

This is a slightly more academic look at how Africans, the author argues, “wrested control of soccer from the hands of Europeans,” making soccer their own form of “national culture.”  Because of this, they have now had so much success that their playing and style are highly prized commodities in Europe.

An even more academic look at the evolution of football in Africa, in the context of western colonialism and resistance. Not exactly light reading, but for serious students it might be worthwhile.  Available for free here.

The African Game, by Knox Robinson and Andrew Dosunmu

A lush celebration of the sport and its fans across the continent, this book came out around the 2006 World Cup and “follows a narrative of the sport in Cameroon, Senegal, Togo, Cote D’Ivoire, Angola, Ghana, Tunisia, and Egypt.”  Apparently a documentary is also in the works.