To a village dweller on Hainan, the Great American Clown Panic of 2016 would certainly seem strange, while the 1985 ghost panic of Hainan would make a certain amount of sense. This was largely because they had heard the stories about genital-stealing ghosts before. Older residents “vividly remembered previous epidemics in 1948, 1955, 1966 and 1974” that had also affected hundreds of people. Our culture is the ecosystem of narratives that we belong to. One study found that the difference between victims and non-victims was 100 percent of victims had prior knowledge of the danger of the fox ghost, and 100 percent of them had a fear of death due to genital retractions. Culture-bound syndromes and mass panics emerge from the stories that we believe could be true.

For the same reason, the clown panic makes a certain kind of sense to us: we have heard this story before. “The story always sounds real,” says Robert Bartholomew, author of Outbreak! The Encyclopedia of Extraordinary Social Behavior and many other books on the topic. “A pedophile or sadist trying to lure people into the woods. Yet when you look into it, these stories go back for centuries. Folklorists have a name for them: bad clown narratives, or killer clown, phantom clown, stalking clown. For me, phantom clowns are the bogeyman in another guise. They are living folklore. They are a modern myth in the making.”

Clowns, in our culture, have a long and complicated history. According to Bartholomew they were viewed positively until the late 1800s, when they began to appear in operas as murderers. Around the Great Depression in 1930, traveling circuses hit hard times, so they spun off into smaller sideshow carnivals. These were called “Dark Carnivals” (like the Ray Bradbury novel of the same name) and there clowns were dark, creepy, and scary. 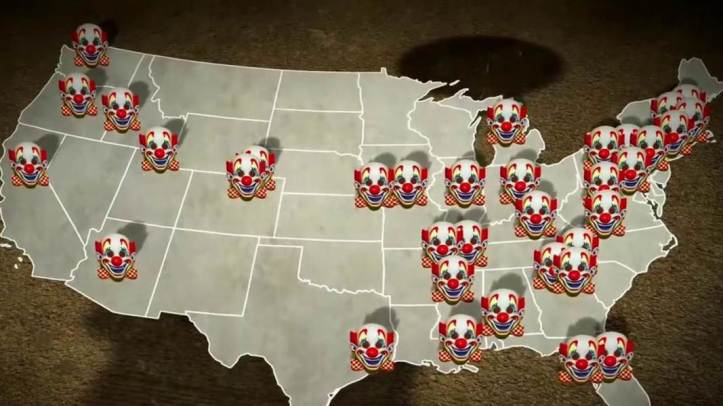 Frank Bures is the author of "The Geography of Madness: Penis Thieves, Voodoo Death and the Search for the Meaning of the World’s Strangest Syndromes," and the editor of "Under Purple Skies: The Minneapolis Anthology." He writes about travel, culture, language, science, outdoors, narrative and belief. For Dispatches, his TinyLetter news update, subscribe here.