One morning in September, on a small bridge across the Mississippi in northern Minnesota, where the river is no bigger than a stream, a group of activists gathered in the fog to erect a teepee frame. They wore masks and bandanas over their faces. Behind them, heavy machinery idled, waiting. Across the poles of the teepee, the activists draped a banner that read: “Stop Line 3.”

The protesters were part of the “Ginew Collective,” a secretive group, run by Anishinaabe (Ojibwe) women, that has banded together to fight the replacement of Enbridge Energy Partners’ Line 3, a pipeline that runs from Joliet, North Dakota to Superior, Wisconsin. The new construction would replace a section of Line 3 that was built in the 1960s and is aging badly, but would follow a different route through the heart of Ojibwe Treaty Territory, where local tribes still have hunting, fishing and gathering rights. The bridge on which the activists were standing was near where the proposed pipeline would cross the Mississippi, pushing some 760,000 barrels of oil across the state each day. 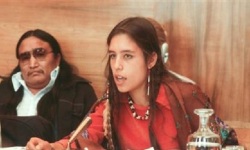 The Ginew Collective is one of several groups that have cropped up since the Minnesota Public Utilities Commission initially approved construction of the pipeline last summer, against the wishes of the tribes, the Minnesota Department of Commerce, and the legions of “Water Protectors” who have traveled north over concerns ranging from protecting wild rice from oil spills to catastrophic climate change. Other groups include the “Ojibwe Warrior Society,” as well as several resistance “camps” along Line 3’s route. They are part of what The New York Times calls a “historic moment” in Native American political activism across the country. As Mille Lacs Band of Ojibwe Chief Executive Melanie Benjamin said last January, “over the past year and a half, something has happened.…As a band, we are awake.”